“Sirens” and Its Overture

The attached file (available as an Excel document or a Portable Document) is a spreadsheet displaying the correlation between the overture and the body of the “Sirens” episode. The key below explains the spreadsheet’s organization. The text is based on the Gabler edition, though notes appear in places where the text in question varies between the Gabler and the 1964 edition.

In the spreadsheet, the lines in the overture number sixty. This arrangement is based on the Gabler edition which denotes sixty-three lines. However, three of these lines are indented, representing a continuation of phrase from the previous line. This study counts each of those continuations as part of the initial phrase and thus depicts sixty lines (or phrases) in the overture.

The above screenshot shows three highlighted areas, two in yellow and one in green. Each of these areas is explained in more detail below: 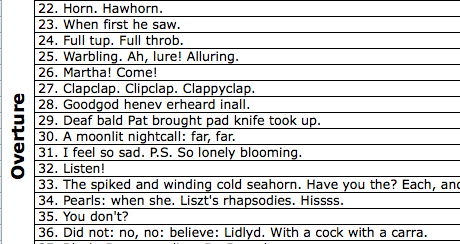 The row structure is based on the sixty lines of the overture of “Sirens.” Each overture line comprises a row in the spreadsheet. The text pictured above constitutes lines 22 through 36 of the overture in their entirety.

For example, the box at the intersection of the first overture phrase and line 64 of the text displays the words “Bronze by gold.” These words can be found exactly as written in line 64 of the Gabler edition of Ulysses. The full line from the body of the chapter reads: “Bronze by gold, miss Douce’s head by miss Kennedy’s head, over the.” The words in the spreadsheet are in bold and the background boldly highlighted because the lines reference the overture most explicitly at this point in the body of the text. Note the entries below are not in bold because, though line 64 contains at least one word from the corresponding overture phrase, the overture phrase is not explicitly invoked by the use of the word. “Gold,” for instance, appears in several overture phrases, so any time that “gold” appears in the body of the chapter, it will appear in several rows. It will only be boldly highlighted, however, when the word is used in a phrase that closely resembles the phrase in the overture to which it explicitly corresponds.