Examples of Distribution and Analysis of Text

Computer Aided Textual Markup and Analysis (CATMA) is a program that allows a user to load a text file and then tag and analyze that file. A full description may be found at CATMA’s site.

The following examples represent some of my investigations into the repetition of phrases and recurrence of characters within and across Joyce’s Dubliners, Portrait, and Ulysses.

The following is a copy of the graph from Chapter Five. It shows the occurrence of three major descriptions that are repeated, revised, and refined throughout Portrait. 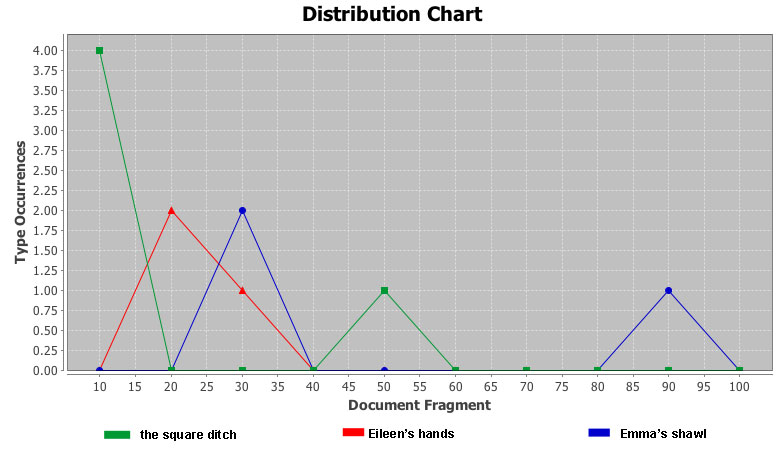 CATMA offers the potential for much deeper investigation of repetition and revision, but this sample shows the basic layout of what the result of analysis looks like.

As discussed in Chapter Five, several of the story titles in Dubliners are are subtly invoked in other stories in the work. The following chart graphs the occurrence of words in the text that suggest titles. A key and further description follow. 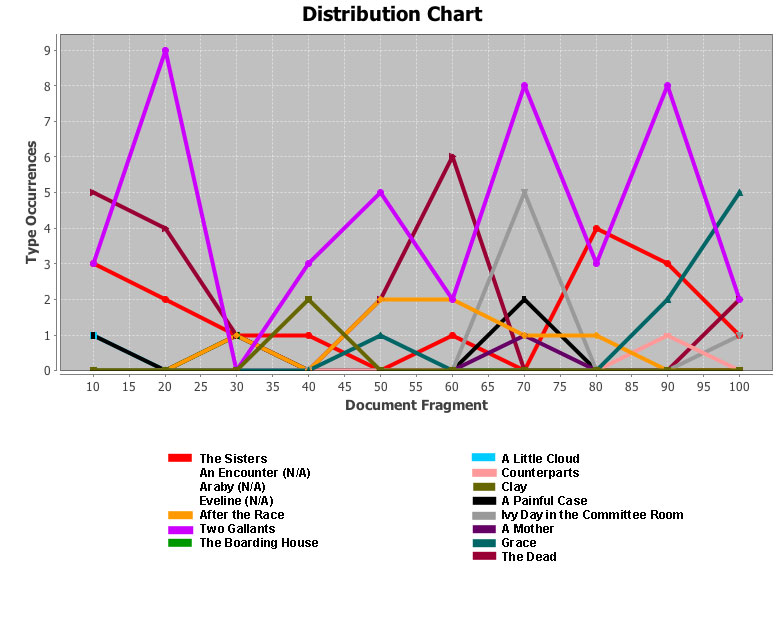 The horizontal axis (“Document Fragment”) represents parts of the book, where 10 is the first 10% of the text and 100 is the end. (The first 10% spans “The Sisters,” “An Encounter,” and “Araby.”)  The vertical axis (“Type Occurrences”) represents the number of occurrences of the words or phrases in question. In my analysis, I omitted from the results any occurrence of a title reference in its own story. Thus, for example, the word “dead” occurring in the story “The Dead” is not included in the graph. Since the goal is to find references to stories in other stories, I only track potential references occurring outside of their own stories.

“Two Gallants” appears to be frequently referenced because I chose to tag occurrences of the phrase “two Xs” in which X is a person. Some examples are “two poor women,” “two gentlemen,” “two ignorant old women,” “two murdered princes,” etc. These frequent references may be less meaningful, though, than a very close and infrequent match, such as “little clouds of smoke,” a possible reference to “A Little Cloud” in “The Sisters.”

The following graph shows the occurrence of characters’ names in Dubliners. The visualization is meant to show the ubiquity of characters that populate the text, and thus a key is not provided as distinguishing between lines is very difficult. This analysis tags 153 characters. 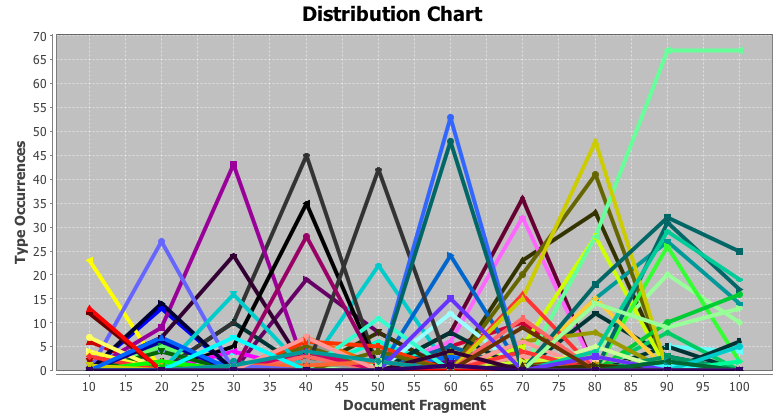 Though still difficult to distinguish, the character frequencies in the graph below represent the characters ofPortrait as they appear in the novel. A key is provided since there are far fewer lines (only 55) to track. 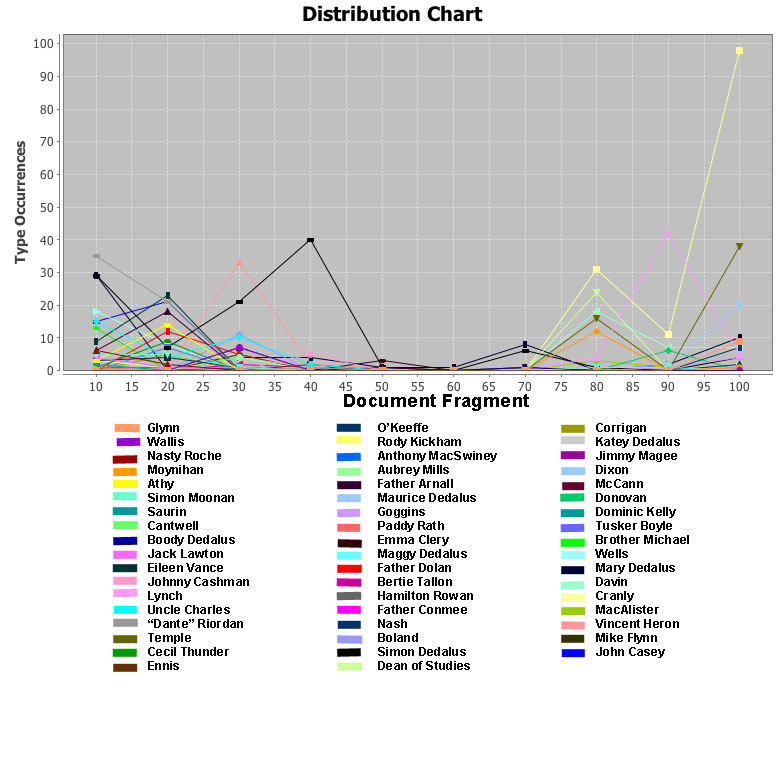 While each of these graphs demonstrate the ubiquity of characters in Dubliners and Portrait seperately, we might also track the appearance of recurring characters across texts. For example, some Portrait characters reappear in Dubliners, and the following graph displays those reappearances. 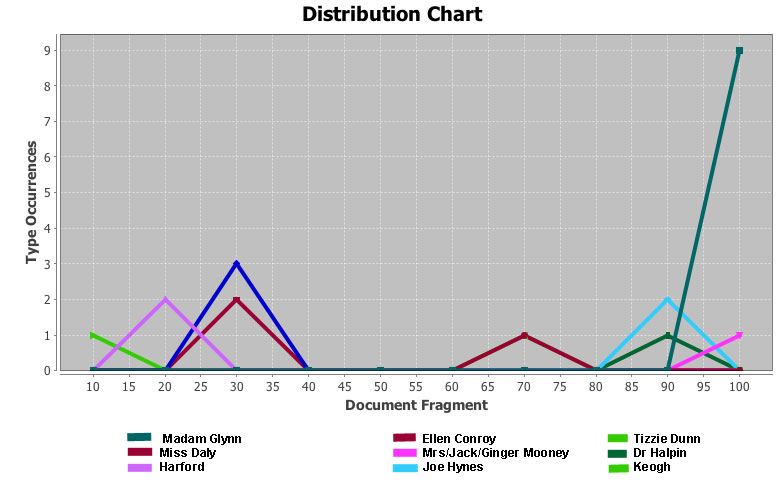 The correlation between the characters in Dubliners and Portrait characters is actually quite subtle. There is nothing in Portrait that actually suggests these are the same people. In fact, many of the connections between these two works, in terms of characters, are merely representative of potential familial relation at most:

The graph below shows the occurrence of Dubliners characters in Ulysses. 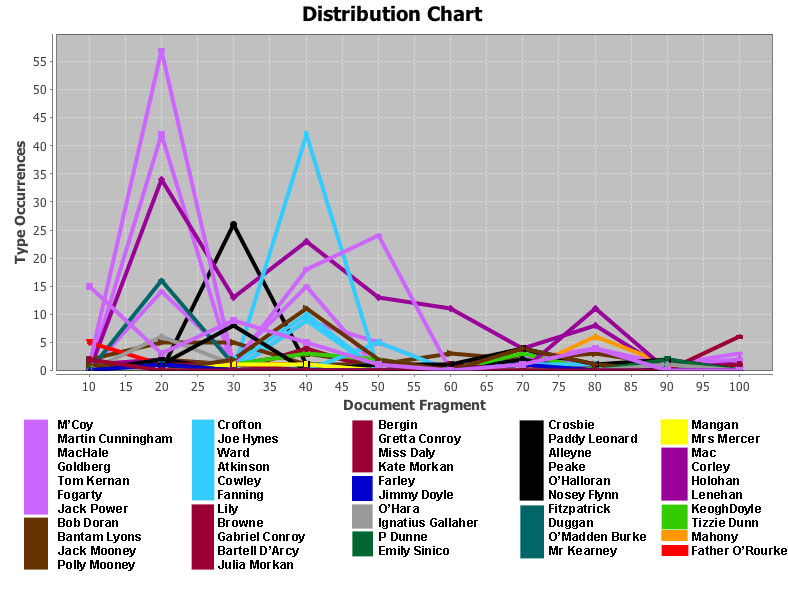 The characters of each story are color-coded similarly to show the reference not only between characters but which stories might connect most closely with Ulysses because of the shared characters.

The graph below shows the occurrence of Portrait names in Ulysses. 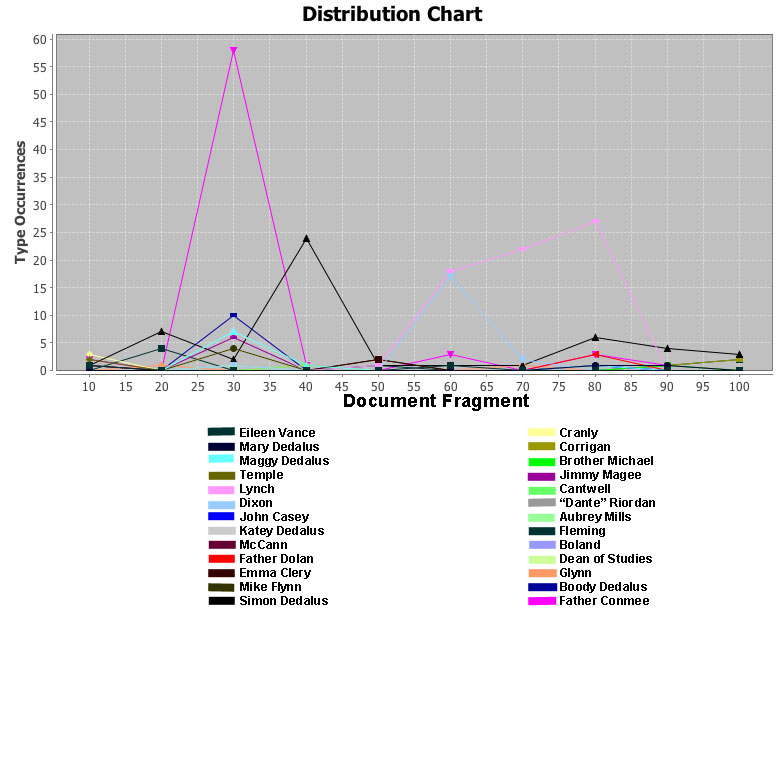 The analysis does not include Stephen Dedalus since he is an obvious major part of Ulysses. The graph shows that the two most visible characters from Portrait in Ulysses are Father Conmee and Simon Dedalus, though they appear most densely only in certain parts of the novel.

To simplify the visualization, we might graph only two tags: Dubliners characters and Portrait characters: 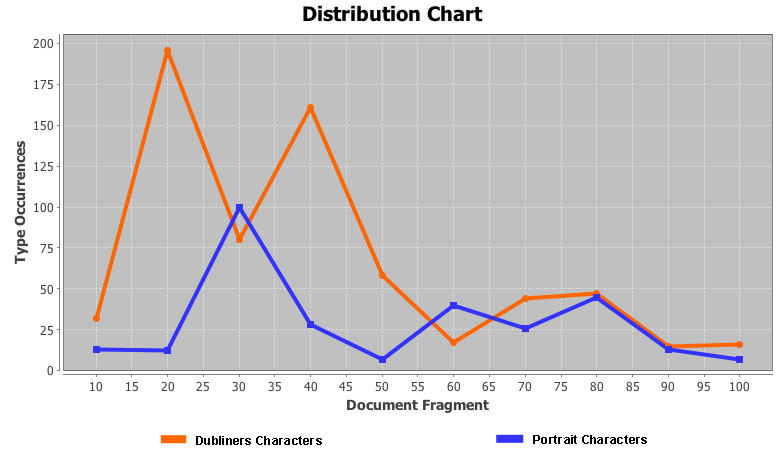 The occurrence of Dubliners character names peaks twice, and in between the peaks, the characters from Portrait peak. Both references drop off toward the end of the novel at about the same rate.